His most recent oil paintings from January 2006

Spiraling life
Here is a new oil painting, 39"x 30" / 99cm x 76cm (wrapped around stretchers bars,canvas)
The four sides of the painting is painted; the depth of the painting is1.5 inches.
The name of the painting is Spiraling Life.
It's about the rotation of the galaxies in space. The power turns with the energy.
Tornados, Hurricanes etc. do spin in that direction of the occurrence.
The Anasazies (first people) carved on the cliffs in the direction of rotation.
The tepee represents the sacredness of our beliefsand how we are growing as humans.
The kachina is represents the creationsof all things, and the plus signs in the ski represents our stars.
The tepee sits in the snow with the swirling snow fakes.
There are shadows ofpeople sitting in the tepee.
The painting is 2006 and heavy with raised oils.

Here is my Totsohnii Girl oil painting. Totsohnii mean the Big Water Clan in the Navajo culture. Maylene and our children are Tohsohnii Clan.
The Totsohnii's believe the orgin of life comes from the Ocean. The sharks are circling above while she (Totsohnii Girl) waits for the sharks to pass or waiting for the right time to move for a kill. The Navajo maiden is hunting across the valleys of Navajo Nation.
31"x48" ( = 78cm x 122cm) oil on masonite.
Completed in 2003
Enjoy 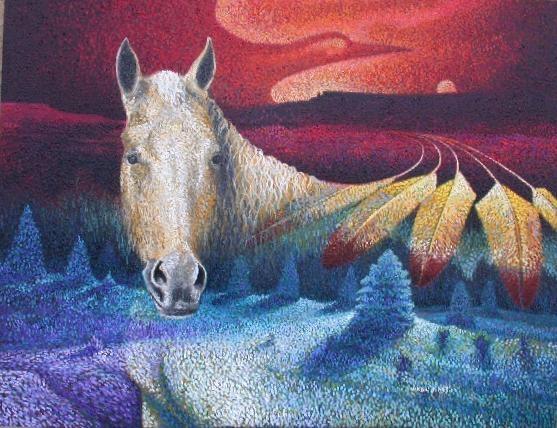 The name of the painting is Inside the Rain Drop.
I thought I'd share my new creation with you. It's an oil painting on masonite board.
The dimension is 35.5"x48" ( = 90cm x 122cm).
The horse is a champion in his/her speed.
I put the red-orange falcon in the sky to represent the speed (spirit) of the horse.
The foreground is in winter and the background is in summer.
The wing (feathers) comes into the horse as a sun ray.
Completed 14 January 2004
Enjoy 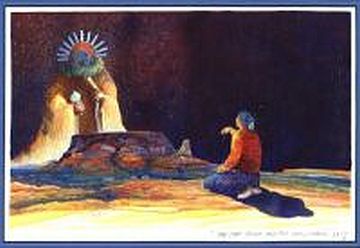